"The Queen's Vow" tells the story of the early life of Isabella of Castille and begins as seen through the eyes of a four year old girl who does not yet understand the burden, or expectation, that will be her destiny.  As Isabella grows up, secluded from the Spanish Court due to the accession to the throne by her half-brother Enrique, she develops the qualities that make her a popular, beloved and flawed ruler.  Her marriage to Ferdinand of Aragon gives her the strength to follow her conscience and together they unite their domains and try to bring peace and prosperity to Spain.

She and Ferdinand endeavour to protect her people from the Grandees (Lords) who are taxing their subjects into poverty, and the Church which is adamantly enforcing their desire to bring religious unity to Spain.  Isabella is a devout queen but has reservations about the draconian methods proposed by the enigmatic Dominican monk, Tomas de Torquemada.  However, it becomes apparent that she cannot stop the Inquisition and so tries to limit its authority, much to Torquemada's chagrin. 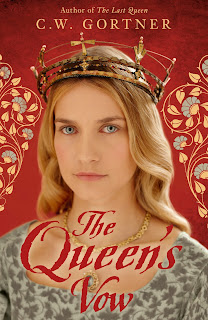 The way to my heart with historical fiction is to create an atmospheric, evocative opening that urges you to continue reading.  A battle, a murder or a cataclysmic event may well provide a strong opening but rarely does a story maintain the early momentum.  I find that a more subtle beginning gives you a clearer picture, not only of the character and their predicament, but of the writer's expertise.

I am constantly amazed by writers who can narrate a tale in first person, but whose gender is the opposite of the character who is telling the story  To know the intricacies of another sex, the way they think and act, the way they dress and prepare themselves for court is one thing, but to convey it to the reader with seamless ease is another.

Christopher Gortner is a master story-teller, weaving superbly written fiction around an extensively researched historical backdrop.  You can actually hear Isabella's voice resonate through the centuries and, dare I say it, believe that Gortner's fictional creation is an accurate depiction of Spain's most famous queen.  and .  I feel this book is one that will become another runaway success, and deservedly so.  I thoroughly enjoyed it and award "The Queen's Vow" 4 Crosses !

Christopher Gortner has written an article, exclusively for Sir Read-A-Lot, to celebrate the release of The Queen's Vow! You can read it here.