A dying man’s cryptic message which must be passed onto the infamous Olaf  Tryggvasson – otherwise known as Crowbone.  Once the mysterious message is understood ,so begins a race against time to locate the artefact that will secure Crowbone’s assent to the throne of .  But his bitter rival, Gunnhild the Witch Mother of Kings, has found out about his quest and she will stop at nothing to prevent Crowbone uncovering the truth about the artefact and where it lies.

Leading a newly formed crew, the Chosen Men, he has to overcome treachery and deceit in order to fulfil his destiny. 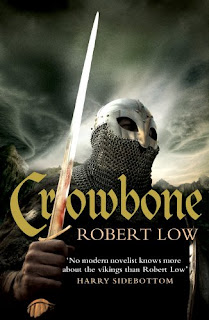 The image many of us have of Vikings is sterilised by folklore and the brutal elements of their culture is left out of many school history lessons.  However, Robert Low does not hold back and the violent nature of their existence is brought vividly to life.

“Crowbone” is the fifth in Robert Low’s popular “Oathsworn” series and the first one I have read.  The depth of description and knowledge of the Viking way of life makes Robert Low an exceptional story-teller.  I did feel that some knowledge of the Oathsworn’s past adventures would have made the book more enjoyable, but that is not meant as a slight against the author but is merely an observation by a reader.

The story is fast paced, and the plot constructed in such a way that you never lose sight of Crowbone’s progress.  If you like your historical fiction to be gritty, violent and expertly researched then you should put this book near to the top of your “to be read” pile.

Review - Sons of The Wolf by Paula Lofting

It is 1054 and the country of England is united under the pious reign of King Edward, who history will remember as “The Confessor”.  Earl Harold Godwinson has strengthened his position and is one of  England’s most powerful barons; a position that is greatly despised by his rivals.
Lord Wulfhere, a trusted and loyal vassal of Earl Harold returns home after the Battle of Dunsinane, where the evil MacBeth was defeated and killed.  The horrors of that battle and the brutal rape and pillage of local villages plague him in dreams, but being home with his wife helps to ease the burden.  All is not well, however.   He is involved in a feud with a neighbour, the disgraceful and cruel Lord Helghi. Harold is fed up with the constant warring between the two families and proposes Wulfhere’s daughter marry Helghi’s eldest son in order to unite their families.  However Wulfhere desperately tries to find a way to save his daughter from Helghi’s lecherous hands without disgracing himself in the eyes of Earl Harold, however the biggest threat is one he cannot see – one that is a lot closer to home than he realises.

Review
Historical fiction, in general terms, is only as good as the research that supports the fictional story.  Paula Lofting is passionate about the local history of her native Sussex, the main location for “Sons of the Wolf” and the depth of knowledge she has is reflected in this engaging tale.
The book starts slowly but gathers pace and the taut emotions surrounding Wulfhere’s dilemma stirs emotions and you want him to find a solution, you side with him and egg him on from the sidelines, as it were.  Each character is written with passion; their emotions, their deepest secrets and hopes and fears are teased out and exposed at the right time which adds to the tension.  The story is entwined around a skeleton of well researched historical fact and you instantly get a sense of the era and what it must have been like to live 1000 years ago.
To me, a great historical fiction novel, is one where you cannot distinguish the fact from fiction and you go through the authors notes at the end or trawl the internet to discover what elements were true.  I can honestly say, Paula Lofting has written a very good book but there were some editing issues in my copy; however I understand these have now been corrected.

Sons Of The Wolf is a great read and I am looking forward to reading the second half of the story once it is written.  I bestow Sons Of The Wolf 4 Crosses!
You can buy "Sons of the Wolf" from my Amazon Store!
X X X X

Cards On The Table - An Interview with Karen Engelmann


The novel grew out of my experience of living in Sweden for almost 9 years. I was in my 20s and working in design and illustration at the time. The impressions of the country, especially Stockholm, were indelible. Later in life, when I began to take writing seriously, I knew that this was material I should explore. I spoke the language and knew aspects of the culture, landscape, and temperament from personal experience, but I knew little to nothing about Swedish history. I began to read about the Gustavian age, a period that still resonates and fascinates Swedes. I got completely hooked; it has drama, murder, beauty, refinement, and revolution — all great stuff for fiction. Weaving those elements together with folding fans was the unlikely start to the novel, which began as my Master of Fine Arts thesis. Getting to the book that you now hold in your hands was a mysterious and wonderful five-year process!

I love the way the book has been packaged! It’s an argument for the power of a beautiful object and displays the ability of great design to communicate. Because I worked so many years in design, I also know how much work was required and what great talent was brought to the project. The interior of the book was designed in NYC by Suet Yee Chong. I provided the text, the timeline and Octavo diagrams, and she took it from there. I think it is gorgeous. The Two Roads cover for the edition was designed by Al Oliver. The hand-drawn title is just delicious and the silver embossing, wonderful texture, ornate border, and choice of deep indigo endpapers (!) are brilliant. Bravo, Suet and Al, and many, many thanks!

Researching this novel required an enormous amount of reading, much of it in Swedish. Two friends in Malmö served as my “librarians” and sent me many books on Swedish history, culture, architecture and Stockholm (and a much needed dictionary!) The Internet was also an incredible tool — without it the book would have required ten more years to write! I also looked at period furniture and artwork, and read (in English) about European history of the 18th century, the French revolution, folding fans and playing cards. It was reading about cards that sparked the invention of the Octavo. Gaming was an enormously popular pastime of the period and the novel’s protagonist, Emil Larsson, and his cohort Mrs Sparrow were already avid card players. But in reading about the history of cards, I discovered that cartomancy blossomed in the same period as that of the novel. The first book on divination with cards was published in 1770 and the system we know as Tarot was invented in 1781 (both in France.) Since Mrs Sparrow was French by birth, a fortune teller and smitten with card play, cartomancy was a perfect way for her to express her theory of the eight. 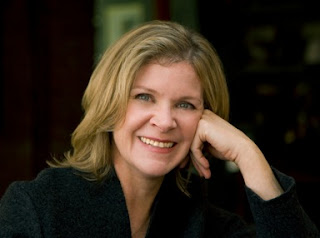 I wrote quite a lot as a teenager, but was more enthralled with the visual arts. That was my path of study and my profession, but after returning to the US from Sweden I was drawn again to writing and it became a passion. I found words to be a more satisfying and flexible means of expression than any artist’s tool. I wrote a lot of (bad) poetry and then went directly to long fiction. I love the opportunity to dive deep into characters, settings and stories.


My pile of books is pretty eclectic; I like to read good fiction of all types and from all periods. The only books I seldom read are true crime (too scary) and thrillers (because I end up staying up until 3AM!) I would never reveal my one favourite book or author because I would inevitably change my mind in a day or two, but there are some books that had a big impact: Toni Morrison Beloved, Tolkien Lord of the Rings, Dickens A Tale of Two Cities, Mark Helprin Winter’s Tale, Michael Chabon The Amazing Adventures of Kavalier and Clay, Jeanette Winterson The Passion… oh, the list could go on and on!

I am working on another novel and it is something completely different. It is historical (barely) and it does involve cards (greeting cards.) More I cannot say as yet, but I am eager to get back into the mess of a first draft I have left stewing for a couple of months.

After spending so much time in my fictional Gustavian Stockholm, I would have to make it an all-Swedish supé, starting with Gustav III. By all accounts, Gustav was a charming man, although he refused to dine with commoners so it’s uncertain if he would accept my invitation. I might have to make it drinks. It would be wonderful to get the story first hand and he could settle so many arguments that scholars have about his life! In order to make Gustav feel more comfortable, I would also ask Carl Michael Bellman, the poet, composer and party boy of the period. If conversation lagged, he could perform. Thirdly, I would ask painter Ulrika Pasch. She was a successful miniaturist and portrait artist, had her own studio, and was a member of the Swedish Academy. She was often employed by the Court but was said to be a very humble person. Personally, I think she must have been tough as nails to make it in the man’s world of the late 18th century and I would love to hear what she had to say.