The Darkness of Depression - "From Darkness into Light" Blog Hop 2013 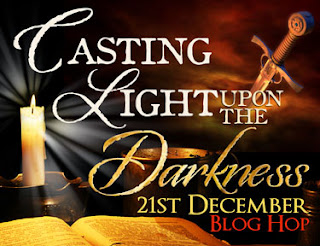 The Darkness of Depression
To many people, having something in common with Ernest Hemingway, Sir William Blake, Oscar Wilde, Stephen Fry or Agatha Christie would be something to celebrate.  I am in esteemed company, or so it appears.  Whilst I would love to have a small amount of the talent for writing that those mentioned possessed, the trait that we share is something darker and certainly nothing to shout about.  I suffer with depression.

Oh, depression? You mean you sometimes feel a bit sad? We all get like that sometimes, get a good night's sleep, get a grip, things will look better in the morning.  Isn't that what you mean by depression?  Well, no actually. Depression is something people seem reluctant to talk about - myself included - because you are automatically assumed to "have something wrong with you" and are judged by people who know little about either yourself or the condition itself.

It is difficult to comprehend how depression can cripple someone who is outward looking, funny, intelligent, esteemed, admired or loved.  It isn't a character flaw, nor is it something that can be ignored.  For myself, it comes in waves normally as I am experiencing personal issues, flare ups of pain in my health condition or when bad news is received.  Simple things such as answering emails, dealing with correspondence, keeping myself and my home clean & tidy or doing things that normally give me pleasure like reading, painting or writing seem so daunting that I revert into myself even more.  It makes you feel hopeless, useless and you question your role in the world and whether or not your family and friends deserve you.  You sink into a deep black hole, so dark and black  it makes you feel that you can never climb out.  Sometimes it lasts a short while, other times it can last weeks or even longer.  But it is at those darkest, bleakest times that a support network along with a prepared plan of recovery - which could be medication, cognitive behaviour therapy, natural or alternative therapies - help provide the tiny ray of light that brings you back into the real world.

My depression is not that severe, when compared to others.  But it floors me in ways that make me withdraw into myself and it must seem to friends and acquaintances that I am ignoring them and my responsibilities.  I am not, but at times like that I need you to shine a torch and light a candle for me so that I can bring myself out of the darkness and into the light once more.

1.      Helen Hollick : A little light relief concerning those dark reviews! Plus a Giveaway Prize
2.      Prue Batten : Casting Light....
3.      Alison Morton ‎ Shedding light on the Roman dusk
4.      Anna Belfrage  Let there be light!
5.      Beth Elliott : Steering by the Stars. Stratford Canning in Constantinople, 1810/12
6.      Melanie Spiller : Lux Aeterna, the chant of eternal light
7.      Janet Reedman   The Winter Solstice Monuments
8.      Petrea Burchard  : Darkness - how did people of the past cope with the dark?
9.      Richard Denning : The Darkest Years of the Dark Ages: what do we really know? Plus a Giveaway Prize!
10.  Pauline Barclay  : Shedding Light on a Traditional Pie
11.  David Ebsworth : Propaganda in the Spanish Civil War
12.  David Pilling  :  Greek Fire plus giveaway
13.  Debbie Young : Fear of the Dark
14.  Derek Birks  : Lies, Damned Lies and … Chronicles
15.  Mark Patton : Casting Light on Saturnalia
16.  Tim Hodkinson : Soltice@Newgrange
17.  Wendy Percival  : Ancestors in the Spotlight
18.  Judy Ridgley : Santa and his elves  Plus a Giveaway Prize
19.  Suzanne McLeod  : The Dark of the Moon
20.  Katherine Bone   : Admiral Nelson, A Light in Dark Times
21.  Christina Courtenay : The Darkest Night of the Year
22.  Edward James  : The secret life of Christopher Columbus; Which Way to Paradise?
23.  Janis Pegrum Smith  : Into The Light - A Short Story
24.  Julian Stockwin  : Ghost Ships - Plus a Giveaway Present
25.  Manda Scott : Dark into Light - Mithras, and the older gods
26.  Pat Bracewell Anglo-Saxon Art: Splendor in the Dark
27.  Lucienne Boyce : We will have a fire - 18th Century protests against enclosure
28.  Nicole Evelina What Lurks Beneath Glastonbury Abbey?
29.  Sky Purington  :  How the Celts Cast Light on Current American Christmas Traditions