England 1170 - King Henry II has uttered a sentence that will reverberate for centuries.  Five knights are charged with the arrest and detainment of the Archbishop of Canterbury, Thomas Becket.  One of the five, a young mercenary called Sir Benedict Palmer, sees this opportunity as a way to escape his poverty stricken existence and gain favour with the king.  However when the clandestine arrest turns into cold blooded murder, his life is turned upside down.

The main reason for the attack on the most revered holy man in England is to secure a young nun, Theodosia who unknowingly holds the key to a secret.  The ring leader of the group, Sir Reginald Fitzurse, has plans for the young nun which involves rape, torture and murder.  Palmer's conscience gets the better of him and he escapes from Fitzurse with Theodosia.  As they make their escape, they venture across England and try to discover the real motive behind Becket's assassination, a truth that could destroy England and bring about the King's downfall. 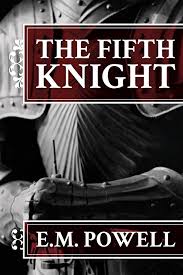 Re-telling history is a dangerous and often thankless task. Rather than accepting the author's fictional account of what might of happened, you tend to get "helpful readers" as Bernard Cornwell calls them, who are keen to point out the minutiae of errors in facts or are plainly affronted that you have  been brave enough to write a different version of events.  However, I believe good historical fiction is based on two words..."What If?"

E.M. Powell has asked that question and written a tale that gives an alternative version of one of history's most infamous killings.  There were, of course, four knights involved in Thomas a'Becket's however what if there were five?  This is the wonderful premise of an engaging and well-written novel that was originally released as a Kindle serial.

A flawed, chivalrous hero paired with a naive yet beautiful heroine is always a mix that works, regardless of genre.  Their pursuers are sociopathic and sadistic, there is a conspiracy and the fate of a nation hangs in the balance as good battles evil. What more could you ask for?

"The Fifth Knight" is thoroughly enjoyable, well researched and easy to read.  E.M. Powell has created a novel that will appeal to all and I award it 4 crosses!

Buy "The Fifth Knight" from the Sir Read-A-Lot Amazon Store!
Posted by Unknown at 08:47