In 74 BC a warrior from Thrace returns home after many years away fighting for the Romans who invaded his homeland.  He finds out his father and brother have been murdered and in an attempt to avenge their deaths, he is beaten and sold into slavery.  Taken to Rome, Batiatus a trainer of Gladiators buys the Thracian and takes him to his ludus in Capua.  There he is given the name Spartacus.

Every day he has to fight and train, knowing that his mortality is postponed until his skills as a fighter, or his luck, runs out.  He allies with a young boy, from a family whose business and home was taken from them after getting into debt with Crassus, Rome's most wealthy citizen.  Between them, they form an alliance and watch each others backs as the divisions of race within the ludus is just as dangerous as the Arena itself. 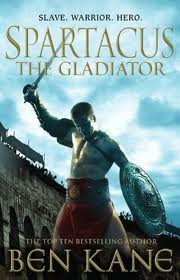 Once again the Roman Empire and the bloodthirsty, violent society it created has been brought vividly to life by Ben Kane in yet another excellent book.  His painstakingly accurate, superbly researched novels have won  him a "legion" of fans and he has - quite rightly - gained a reputation that ranks alongside the likes of Simon Scarrow and Harry Sidebottom.

The details of Spartacus slave revolt has been, for the most part, stricken from the records of Ancient Rome but the legend of the gladiator who raised an army and almost brought the Empire to its knees.  A mere 4000 words remain officially of his story, but using his knowledge of the era Ben Kane has pieced together a story that still intrigues people 2000 years after its occurrence.

You can clearly imagine the harsh life, the sound of the crowd baying for blood, the cries of the dying and the  noise of the swords as they hit flesh and bone.  I find that there is always a danger with Roman genre and that the plot can be bogged down by historical descriptions of the many weapons, social classes and the like, but the way Ben Kane writes is a joy.  Despite the technical details of gladiator life or weapons training, you never switch off from the plot and the prose is light and easy to follow.

I thoroughly enjoyed "Spartacus: The Gladiator" and award it 4 Crosses!