England, 1315.
The farmers and villeins of Northern England are starving to death.  After a year of bad weather, a bitterly cold winter and a soaking wet summer has decimated crops leaving them destitute.  Lord William & Lady Mabel  Bradshaigh are sympathetic to the dire position their tenants are in and do all they can to ease their plight.  Bradshaigh’s overlord, The Earl of Lancaster,  is not so kind and demands his full levy of tax and tribute each quarter, regardless of the suffering it causes.  William is persuaded to join forces with some of his fellow lords to overthrow Lancaster but the insurrection is short-lived and William is forced to go into hiding.

His lands are forfeited for a year and a day and Mabel is forced to endure the brutal Sir Peter Lymesey, a favoured knight of the Earl.  His uncouth personality is barely tolerable, but when he viciously attacks his young,  half-starved squire for stealing an unwanted chunk of bread Mabel makes a stand.
As the year progresses, Mabel is made to believe her husband is dead and encouraged to marry the Sherriff appointed to oversee her estate, Sir Edmund Neville .  Her position is dire, her grief all consuming and the responsibility to protect her staff and tenants is a heavy cross to bear.  She must draw on all her strength to survive and secure her daughter’s future. 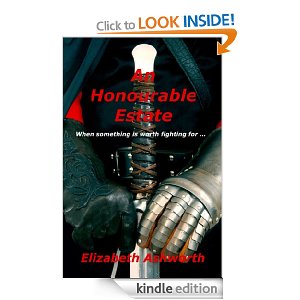 Elizabeth Ashworth certainly knows her history.  A proud Lancastrian, she has written some non-fiction history books focusing on her native County and this novel is extensively and impressively researched.  The legend of Mab’s Cross is the inspiration for this tale and she weaves a plausible story around the skeleton of facts.  The result is a story full of political intrigue and moral questions where, on occasions, there is no right answer - merely a choice that is less wrong than the unthinkable alternative.

The author has created a beautiful story where you are drawn into the desolate world of Lady Mabel.  Her husband can be likened to Robin Hood, driven away from his home and family after standing up to a bullying villain but the focus is on how Mabel copes with the turmoil of her life and how the people around her pull at her emotions, causing her to doubt herself.  Elizabeth Ashworth gives her characters life; there is real emotion in her words that build a connection with the past and you can clearly imagine the futile existence of the peasants.

An Honourable Estate is the story of one woman’s convictions and her desire to live by her morals, to read about such a determined woman in a very immoral, unjust world is compelling.