Novels surrounding the lives of Henry VIII and his six wives are plentiful and, dare I say it, predictable and rather monotonous.  It takes something special to pique my interest in this particular historical period and Michele Kallio has delivered in spades.  Using a unique and complex time-slip element, Michele has created a truly ground-breaking novel in this sub-set genre of historical fiction which is saturated with poor quality, repetitive stories.

The story unfolds using two parallel plotlines, one written in the 21st Century, the other in the 16th.  is a 21st century medical secretary, married to a rather unpleasant doctor and suffers from disturbing dreams that begin to affect her sanity.  She dreams of a girl, of a prison cell, of a beheading.  A friend of her husband is a psychologist who specializes in dream interpretation and past life regression.  Elisabeth Beeton is a 16th Century woman noticed by King Henry VIII who picks her to be hand-maiden to his new wife, Anne Boleyn.  These two plotlines collide as tries to discover why these dreams plague her and, inadvertently, uncovers a family secret that has been hidden for generations. 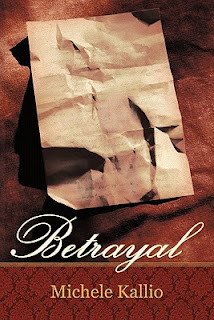 BUY "BETRAYAL" FROM MY AMAZON STORE!

Michele Kallio certainly knows how to write a story, but I do have concerns about the present day storyline.  The characters need to develop further so they complement the strong storylines.  There are times when you want to get a deeper insight into their emotions and history, but you end up guessing what their motivations are rather than glimpsing their real intentions.  Also there are scenes which could be removed as they play no real part in the story.  I can see the author has used them to try and give the reader a sense of empathy with the characters; however they actually serve no purpose and end up confusing you.  In contrast, the 16th Century element is tightly written, plotted superbly and you immediately feel a connection with the characters and the heightened sense of fear and desperation as Henry tries to beget a male heir.

Michele Kallio has written a novel that, in my opinion, with some further work stands a good chance of being picked up by a literary agent.  As a whole, the work is above average but with a professional copy-edit and some rewriting it could be exceptional.  The negative aspects I have pointed out though, do not detract from the work as a whole and I am pleased to give “Betrayal” 4 stars.


Read my interview with Michele Kallio & enter my competition to win your very own copy of "Betrayal" in eBook format!