The Pirate Queen - A Guest Post by Helen Hollick

The fourth journey in the adventures of Jesemiah Acorne, the loveable rogue who features in Helen Hollick's pirate series known as "The Sea Witch Voyages" has been released slightly ahead of schedule! Now of course this means that avid fans of Jesemiah could get their hands on "Ripples In The Sand" a lot more quickly than anticipated, meaning that once again, husbands and boyfriends up and down the land were negelcted whilst Jesemiah's fleet of fans were immersed in another exciting tale.

As part of her blog tour to promote "Ripples In The Sand", Helen Hollick has taken over Sir Read-A-Lot to explain how, against a sea of opposition, she came to write the stories of Jesemiah Acorne in the way she wanted them to be told.  If you believe in something, if in your heart you know what you want then this story should inspire you!  Over to you, Helen! 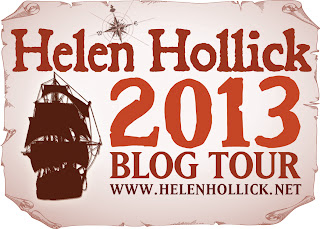 Several years ago I had the (bright?) idea of writing a story about a pirate. He was to be a loveable rogue – handsome (of course), a bit of a so-and-so at times, but always reliable when the going got tough. An amalgamation of James Bond, Indiana Jones, Richard Sharpe, Hornblower, Jack Aubrey and Jack Sparrow. The sort of guy who has trouble following him like a ship’s wake… the sort of story where you know he is going to get out of said trouble, but the reading enjoyment is in discovering just how he does it. He was to be called Jesamiah Acorne. Captain Jesamiah Acorne. And I instantly fell in love with him.

There was to be a romantic side to the plot: all good stories have a love interest. My pirate was to have a special girlfriend, though. She was to be a White Witch. Not the wand-waving, spell-chanting Harry Potter type witch, more like the Jedi Knight using the Force sort of Witch. She was to be young, beautiful (naturally), wise – and loved the pirate despite his (many) faults. Her name was to be Tiola Oldstagh, an anagram of ‘all that is good’.

The idea rapidly emerged in a non-stop writing frenzy that lasted two months, including Christmas – I only paused on Christmas Day. The result was Sea Witch, the first Voyage in what is now an exciting series. And I am loving every minute of writing the books – there are now four, with a fifth (by popular demand!) about to be started.

But Sea Witch was very nearly scuppered before she was launched. I was told that nobody wanted to read about pirates. In particular, adults were not interested in pirates. Pirate stories were for children, pirates were for teenage boys. I was not very politely told to go away and re-write my story for the more appropriate age group, or write something else entirely. This was despite the phenomena that Johnny Depp had created with his portrayal of that Sparrow fellow.  The Pirates of the Caribbean movie (the first one, The Curse of the Black Pearl) I was told, was a children’s movie – it was not for adults, nor were women interested in it. No one, would read Sea Witch, or be attracted to my “drunken womaniser” protagonist… (Ahem, Jesamiah is a pirate. Most pirates drink and they like being ‘entertained’ by women; it’s what pirates do when they are not being pirates!)

Fortunately I am a stubborn individual, and saying no to me is like showing a chest of gold to a buccaneer. 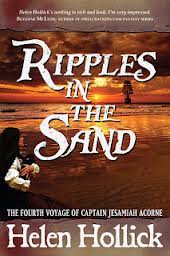 I knew P.O.C. had been a success because of the adult audience. I knew there were women by the boatload out there who had fallen hook, line, and sinker for Cpt Sparrow and who were scouring the bookstores for a sexy pirate adventure for a desperately needed Pirate Fix. Knew it because I was one of those adult women!  I wrote Sea Witch for the primary reason that I wanted to read a book like Sea Witch and couldn’t find one anywhere.

Was I right, or was the unwanted and very depressing and demoralising advice right? Well, the Sea Witch Voyages are doing OK. They are not selling in their thousands – but that is because after being told the above by various agents and publishing houses, I decided to throw caution to the wind, back my own gut-instinct and self-publish my idea. Indie published books are hard to market. There is no massive marketing machine to churn out the press releases and advertisements. There is no highly-funded publisher to send dozens of copies out for review – and Indie books are often frowned on as second (or third, fourth, fifth) rate reads. Being a self-published author for my Sea Witch Voyages is an uphill struggle. It is hard work promoting myself as I am a one-woman-band, and sometimes I feel like I have a very tiny voice whispering in the vast expanse of the entire ocean where everyone else is shouting. I can only reach a limited audience via Facebook, Twitter, Goodreads – and through supportive, lovely people like Cindy, who invite me to say  my piece-of-eight on their blog. So even if I am whispering, there are a few of you out there, listening, and hopefully you will add your voice to the spreading interest. Word of mouth is a powerful weapon – as sharp as a cutlass blade if wielded with enthusiastic swashbuckling excitement!

I have a readership out there, interest in Jesamiah Acorne, my loveable rogue of a pirate captain, is gaining in momentum; people are talking about this New Pirate On The Block (or should that be dock?). I am getting fan mail for Jesamiah – someone even sent him a bottle of rum for Christmas! His creator was much appreciative of it!

Even if I only have a few enthusiastic readers to share Jesamiah’s Voyages aboard the Sea Witch I wouldn’t mind – you see I am enjoying every minute of unravelling his nautical adventures. The books are fun to research, write, and produce; and I hope, are fun to read.

Maybe I have pirate-ness in my blood or something, for even if it takes me a few years and quite a few nautical novel miles of writing ahead of me, I intend to write several more Voyages – and I have every intention of proving the Nay-Sayers wrong.

Readers do want pirate-based novels. Adults – and yes, grown-up women – enjoy a rollicking swashbuckler of a fun escapism-type adventure at sea with a black-haired, dark-eyed charmer of a pirate. Don’t you?

Buy "Ripples In The Sand" & all of Helen's novels from my dedicated Amazon store!
Posted by Unknown at 11:07 3 comments:

Review - The Chalice by Nancy Bilyeau

Joanna Stafford’s Tudor adventures continue in Nancy Bilyeau’s second novel, “The Chalice”, which is released on 28th February.  Reeling from the dissolution of Dartford Priory and the oppression of the Catholic faith, novice nun Joanna now has to make her way in the world without being able to take her holy orders.  She and some of the nuns and monks from her priory live openly in Dartford as ordinary citizens.  They do charitable deeds for the inhabitants of the town but have to practice their faith in an almost secretive manner, due to the zealous persecution of Catholics in England.
A chance meeting with a cousin propels Joanna back to London and she is thrust into the middle of a high-level conspiracy to restore the True Faith and remove King Henry VIII from the throne.  Her beau and constant protector Geoffrey Scovill is on hand to aide Joanna as the prophetic statements made to her in her youth, by a dead Dominican nun begin to reveal, to her horror, that she has a vital role to play in the treasonous plot.  Once again she has to face her persecutors head on and work with those she fears in order to secure The Chalice and fulfil her own destiny. 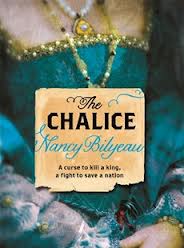 Review
Once again Nancy Bilyeau has delivered a book that grips you from the first word to the last.  As some of my regular followers will know, I am not a huge fan of Tudor period fiction as it treads the same well-worn path.  However Nancy Bilyeau turns this genre on its head with her unique, challenging and emotive character, Joanna Stafford.
Her research is of the highest quality and she weaves real characters with fictional ones in a seamless manner and her books educate as well as entertain.  This second instalment gives an insight into Joanna’s past that was not explored in “The Crown” and you can genuinely sympathise with her plight as she tries to follow her faith in a time when the newly formed Church of England persecuted and executed Catholics with impunity.  All of the characters are deeply constructed and their personalities shine in an almost pantomime hero/villain way – which is a great thing!
Overall this book is a worthy follow-up to “The Crown” and proves beyond doubt that Nancy Bilyeau is a highly talented and imaginative author.  I fully expect to see this book at the top of the best-seller lists when it is released on 28th February.  I thoroughly enjoyed “The Chalice” and award it
5 Crosses!

If you want to read the first instalment of Joanna Stafford's adventures, "The Crown" is also available to purchase from my Amazon store.  Read my review of "The Crown" here, which I awarded The Golden Hammer & Anvil Shield.
Posted by Unknown at 14:46 4 comments: