AD 270 and a newly promoted member of the Roman Internal Security Service Cassisus Corbula is given his first assignment - a probable suicide mission.

The fort of Aluauran is an outpost of strategic importance; standing in the middle of the Arabian desert it holds a well of fresh water and acts as a vital staging post.  The fort is undermanned and a force of Palmyran marches on it under the orders of Queen Zenobia, they are to wrestle the fort from Roman hands and make it their own.

A supporting cohort is making its way to the fort, but it is doubtful they would make it in time to stop the Palmyrans.  Corbula has to take command of the men, falsely telling them he is a Centurion, and hold the fort until reinforcements arrive.  One hundred men against the force of a nation is long odds, but Corbula must prevail or else the Roman Empire will lose its eastern frontier. 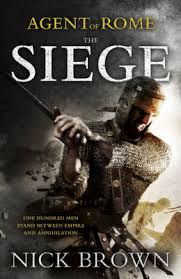 Nick Brown has done a marvellous job in writing a book that is well researched and hugely entertaining.  The premise of an unprepared, yet well theorised young man being sent into a hell-hole to rally a body of men who have little respect for unseasoned campaigners is interesting, especially when he has to conceal his true role as a "Grain Man" - a term used for the Secret Service - who are despised.

I've read quite a few books set in Ancient Rome and can tell that Nick Brown has done an excellent job researching his novel.  His characters are expertly crafted, they jump off the page and the internal dilemmas the inexperienced officer has when trying to rally the troops are superbly written.  In particular, Corbula's  manservant Simo is the pick of the bunch.  Deeply loyal, despite only being given to Corbula at the start of his mission, he is a cross between The Admirable Crichton and a St Bernard; he is perceptive, witty and quickly proves his worth in all manner of ways.

Brown's military knowledge shines through in his battle scenes which are hard hitting and described in brutal terms.  The ragtag bunch of disheartened and drunken soldiers know they have little time to prepare for war and realise they may not survive to see the relief column.
All in all, Nick Brown has written a superb debut novel and I look forward to reading more of Corbula's adventures.