Review - Murder as a Fine Art by David Morrell

London 1854 - the nightly fog that obscures most of London is the perfect hiding place for a killer.  A family is found dead in their home; father, mother, two young children and their housemaid.  All beaten to death and their throats cut.

Detective Inspector Sean Ryan is the policeman in charge of the investigation and it quickly becomes apparent that these shocking deaths are similar to a murder that happened 43 years previous and which were written about in an essay by the infamous writer Thomas de Quincey.  Famous for his book detailing his lifetime addiction to opium "Confessions of an Opium Eater", de Quincey had written a piece called "Murder as a Fine Art" all about the brutal Ratcliffe Highway murders.  It seems this new slaying is a homage to the original and de Quicey, being in London to promote his writing, is the prime suspect.

Ryan is pushed into a premature arrest by the Home Secretary, the powerful an popular Lord Palmerston. But when an attempt on de Quincey's life fails it becomes clear that there are forces at work which have great influence and unlimited resources.  Ryan, his assistant Constable Becker, Thomas de Quincey and his daughter Emily, end up fighting the establishment and a group of hidden assassins not only to discover the killer's identity but to uncover a conspiracy that could have drastic consequences to the British Empire. 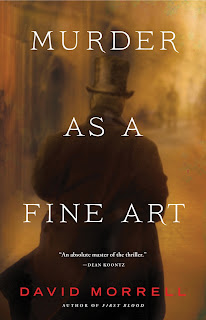 David Morrell transports you back 150 years to a time of social deprivation and when London was one of the most unhealthy places to live in the known world. The odour of sewage, the smog, the gaslit streets and the atmosphere of fear caused by the horrific murders are portrayed evocatively.

The story is well researched and certainly inventive, however I did feel at times that the writing became a homage to the level of research undertaken by the author, rather than a novel which told a story.  I also felt the pace was slightly off, parts of the plot were revealed to quickly in my opinion and a few of the characters needed a bit more "meat on their bones".  I am not a fan of Americans who write novels set in Britain but who feel it acceptable to use American slang rather than the correct words.  For example, an English street urchin would not ask for a "cookie" and neither would they stand on "sidewalks".  I found this to be off-putting, especially as the author has done such a sterling job by thoroughly researching the era in question.

However, there is no doubt that this is a very original piece of work and the author is passionate about Victorian London.  The prose is easy to read and you can clearly imagine being in London as night falls and the fog comes down around you.  Overall, it is an entertaining novel and would be a great holiday read.