Review - The Sister & The Daughter by Ciel Dexter

It is a time of fear, of suspicion and of death.  Medieval Europe has long been under the shadow of the Black Death and now England is succumbing to the plague.  A family of Roma gypsies cross the Narrow Sea and find themselves on the outskirts of a village where the Black Death has struck.  Sophia, the eldest, is a woman of confidence. She has knowledge of healing using herbs, something that could be misconstrued as witchcraft but the people of the village just want their loved ones to survive.  She clearly states that there is no cure, but still they beg her for their assistance.  Her companions are a brother, Shandor and his younger sister, Kali.

The village is dominated by its feudal lord, a man with little mercy for the plight of his people.  In an attempt to protect his family – his daughter especially – from the plague, he order the gates to the Manor House closed and leaves those outside to face certain death.  His malicious attitude towards his serfs is noted with scorn by Sophia who decides to stay.  When the Roma come up with a plan to save the remaining villagers and give them an opportunity to take their revenge on their cruel overlord, they readily agree to assist.  But revenge, love and passion come with a price and the question remains – can you risk it all in order to win your heart’s desire? 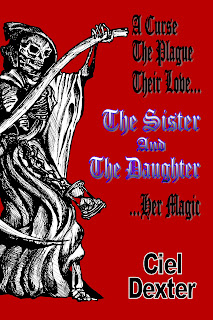 Review
Writing in first person perspective, using two of the central characters rather than the usual one, is a tricky skill to master.  It is possible to lose track of the story, even to become confused between which character is talking but in The Sister & The Daughter, Ciel Dexter pulls it off with ease.  The story that grabs you right from the start and it is impossible not to be moved by the plight of the villagers as they are excluded from sanctuary by a man who values his black stallion more highly than the men and women who work his land and harvest his crops.

Each character is superbly created and the different sides of their personality are gently teased out as the story develops.  The plot is never lacking in depth and each page provides glimpses, pieces of a jigsaw, that you are compelled to complete and you read on with excitement and anticipation.  The description of the plague and the brutal way it decimates a community is written emotionally, as are the characterizations.
An independently published writer needs to make their work as attractive as possible, in the standard of writing and by creating an attractive cover – or at least one that catches the eye.  I have to say I am no fan of the cover; it is too garish and is slightly off-putting.  However, the writing is wonderfully rich and vibrant.  This book is a great example of how good independent writing can be and I am proud to award “The Sister & The Daughter” 4 Crosses .
X X X X
Buy "The Sister & The Daughter" from my Amazon Store!