The Civil War has ended and the President who has done the most in recent to bring about social and political change is dead, murdered in a theatre by a radical lone gunman. As the fledgling United States struggles to comprehend the loss of Abraham Lincoln, a Washington D.C detective, Temple McFadden, becomes embroiled in a situation that could rock the establishment to its core.

He is dragged into a shoot out at the B&O Railroad Station and, on the body of a dying man, he finds two diaries that put him and the ones he loves in mortal danger.  One is that of the President’s widow, the other is written in a mysterious code,  He is soon on the run, using his wits and guile to keep the diaries out of the hands of Lafayette Baker, the head of the Union Army Spy Service and Allan Pinkerton, the famous private investigator amongst others.  What follows will cause him to doubt everything he believes in and if the real reason for Lincoln’s murder was revealed, it would endanger everything the great man had strived to achieve. 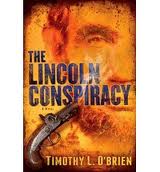 Review
The murder of Abraham Lincoln is one of history’s most defining moments.  Whilst it is undoubtedly a story which is of great importance to the American people, it also has meaning to many people around the world.  A man with a vision who wanted to create a society where everyone had worth, where everyone was equal and no one could claim ownership over another.  But in Timothy O’Brien’s novel, that presumption is turned on its head.

Most readers enjoy a good conspiracy thriller, I thoroughly enjoy the re-workings and re-inventions that talented writers develop around actual events and this story is one of the best I have read this year.  I know little about the history of the USA but that did not spoil the enjoyment of the book because the author seems to have taken that into account and expertly provides a narrative that educates as well as entertains.

The main protagonist, Temple McFadden is a typically flawed hero with a strong, independent wife and a group of friends who cover the whole spectrum of society.  The antagonists are larger than life and twice as nasty and the writing is of a high quality.  All in all this is an extremely enjoyable book that will appeal to fans of historical fiction and thrillers alike.  As such I am awarding The Lincoln Conspiracy 4 Crosses!

Buy "The Lincoln Conspiracy" from the Sir Read-A-Lot aStore!