Review - Like Chaff in the Wind by Anna Belfrage


Set in present day Sweden and 17th Century Virginia and Scotland, the saga of the Graham family continues.  Matthew Graham is kidnapped and sent to Virginia to work as slave labour on a tobacco plantation.  His brother, Luke, wants revenge on Matthew who cut off his nose in retaliation for the abuse he inflicted on his wife, Alex which resulted in the death of their unborn baby.

Matthew's wife, Alex, makes the decision to travel across the Atlantic to free him - a journey that should take two months ends up taking a year and Alex is plagued by nightmares which show her the degradation and suffering Matthew is having to endure.

Can she make it to Virginia and pay the indenture fee to release her husband before he is worked to death? 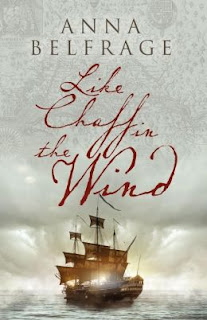 Timeslip novels are tricky things to get right.  Many historical novel purists are reticent to read them as they push the genre to its limits, others enjoy them as they try to bring freshness and new direction.  I am normally one of the purists; I like timeslip and science fiction but to reconcile them into a historical fiction setting is normally off-putting, but "Like Chaff in the Wind" is so well-written, I concede defeat!

Anna Belfrage creates characters that jump off the page and the multi-era storyline is superbly crafted.  She portrays the desolation and fear of the protagonists as they fight to survive a situation not of their making and as Alex's modern day life threatens to intervene and stop her from saving Matthew, you find yourself not actually being aware of reading a timeslip novel - but just a very good novel.

This is a saga with a previous chapter and it would benefit the reader to have read the first novel in the series, but if like me you haven't the story is still enjoyable. Anna Belfrage is definitely a novelist to watch.  Once again, an independent author demonstrates that the industry is one filled with talent and that they ares not afraid to challenge the sensibilities of genre fiction.

X X  X X
Buy "Like Chaff in the Wind" from my dedicated Amazon Store!