It is 1915 and Europe is at war.  The latest assignment for Wolff is to discover the plans of a known Irish rebel who is using the pre-occupation of Britain’s war with Germany to organise a rebellion that will free Ireland from the yoke of English rule.  However, a conspiracy to sink British ships carrying vital supplies across the Atlantic is uncovered.  The trail takes Wolff from Berlin to America, where an even more sinister plot to develop a poisonous gas to be used against the British is uncovered. 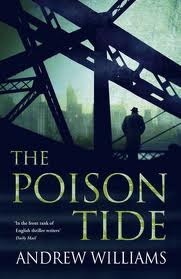 Williams has created a series of novels, this being the third, which could be described as a “niche” product.  Set in the era of the First World War, Williams knowledge of the time, combined with a talent for story-telling, means his historical thrillers are compelling and extremely enjoyable.  Williams skilfully creates a character that is honest, ruthless and flawed. The author allows you to get under Wolff's skin and you can feel his dilemmas, his amoral behaviour with women and the steely determination with which he ensures each mission is successful.  The modern era of spycraft is being born and developed by the newly created Secret service Bureau; dead-drops and sewing tissue paper filled with sensitive information inside linings of coats are some of the imaginative ways Wolff smuggles his findings back to his superiors.

The Poison Tide is a thoroughly enjoyable read.  The technical and historical detail is unencumbered, allowing the reader to follow the plot without distraction.  I have always enjoyed spy novels and there are times when the antics of the hero are implausible, but this is not the case with “The Poison Tide”.  Williams has created a character that will appeal to a predominantly male audience, but I am sure women will see him as a early 20th century Jack Reacher and enjoy these novels too.